In this wintery Perth weather it is good to stay indoors.

I promised my son I would create a canvas for him using his favourite photos for his room. A kind friend had given me 2 square blue ones previously. I decided that I would use them for this purpose. 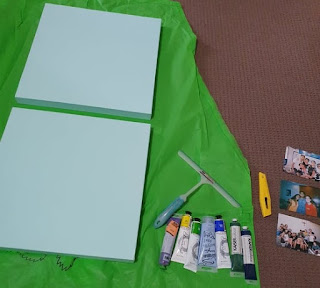 I looked at the colours in the photograph and chose corresponding acrylic paints.

I had seen a cool technique online and wanted to try it myself. It was really simple and involved a window wiper. I use these in my shower every day so I got it out. 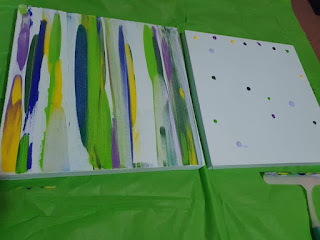 You simple place dobs of paint around the canvas and then sweep down from the top to the bottom until you've done the whole canvas.  Such a fun and quick technique.

I also wanted to add a bit more texture so I got a stencil and some gesso and added some to each canvas. Once on each but on opposite sides. 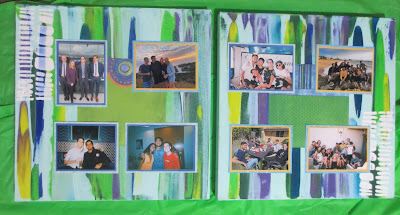 Then I added an 8x8 patterned Creative Memories paper to the middle of each canvas. I had 4 photos for each canvas which I had doubled mounted to highlight them.

Lastly, I wanted to add some chipboard titles. For the friends one I made a little patterned paper box for the title. I coloured the cb and added dimensional magic.

For the boys with attitude I used two nuvo drops colours. 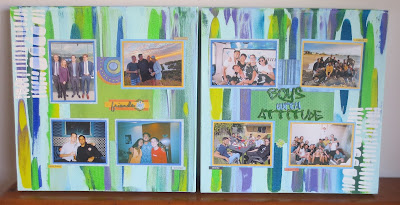 I hope my son loves them. I am sure that he will.

These are my second Design Team offering for this month's challenge at Unstampabelles.

You can enter anything into this month's challenge as long as it involved mixed media and it has "art and all that jazz" incorporated.

I was really excited to create this month's DT submission. I knew just what I wanted to do when I read the challenge.

July - Art and all that Jazz

Whatever art you are into...music, painting, carving, writing, drawing, making stuff, the art of craft.........

What pops into your mind? I thought wall canvas immediately.

I already had a fun art deco canvas to start with that I bought at Kmart over a year ago.

I visited New Orleans in September 2019. I spotted a Ciao Bella paper pack called Jazz Club last year so I had to buy it. It had the perfect background for this canvas. 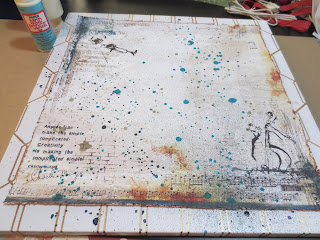 I used Mod Podge - paper - to adhere it to the page and splattered 3 different ink colours over it all. 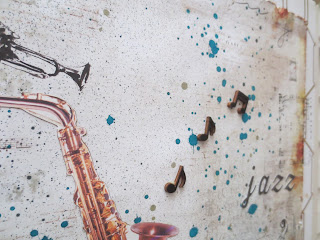 I picked a stock image of a saxophone from the internet and printed it on white cardstock. I also stamped some music sheets using onyx Versa ink.
I had some cute chipboard music notes which I've added, painted black. Had to add the word jazz using Thickers. 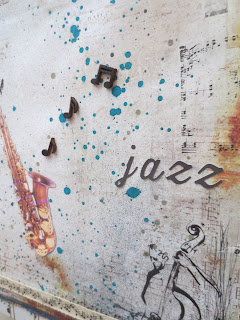 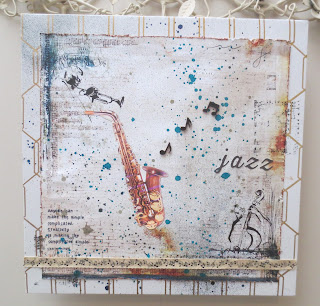 Lastly I added some ribbon that had music notes printed on it.

I had a lot of fun creating this and it was a really easy project.

Head over to Unstampabelles to add your project. I can't wait to see your creations. 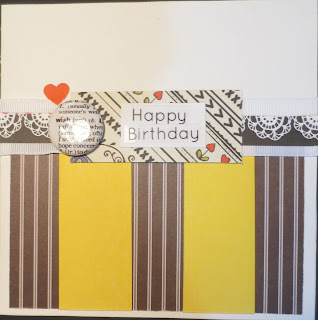 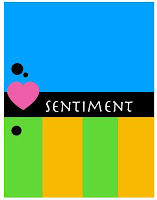 July Archiscraps challenge - I made tags

Thinking caps on for this month's challenge at Archiscraps. The focus is on patterns. The more the better. 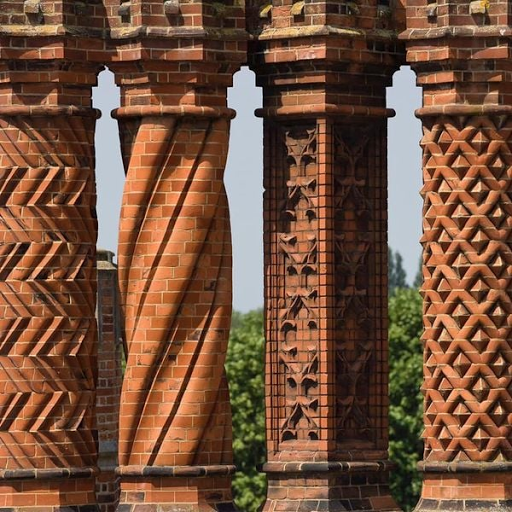 I decided I would have a tag making session.  I keep the nicer clothing labels from clothes that I buy in a box. I chose 4 different ones. Then I proceeded to look at what I had on my craft table to add to them. I had some ribbons and some scrap papers. I also have a little tub of handmade paper flowers. I pretty much mixed and matched. I also added some penwork. Just basic.  I now have 4 cool tags to add as embellishments to future projects.  It was fun too! 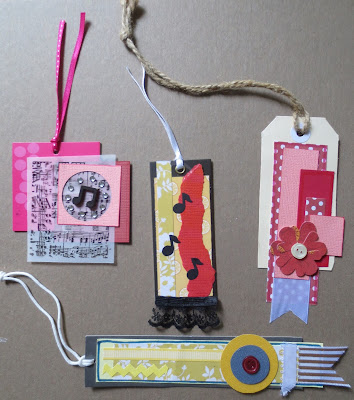 Let me know which one you like the most.
Dale x
Posted by Dale Tiernan at 2:12 PM No comments:

ARTastic is a fun challenge blog. There is an inspiration painting and then a criteria to add to your scrapbook layout design. 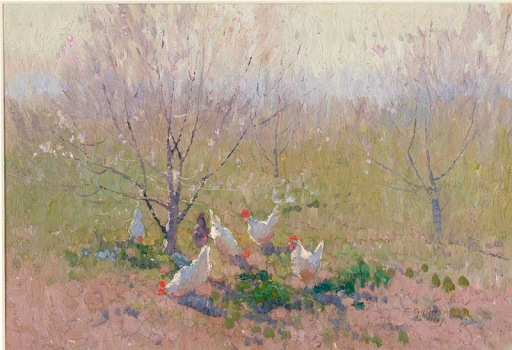 The criteria to add is a rural/garden scene, plus feathers.

I chose to use some photos from a boat tour I went on with my husband in Borneo. There were many exotic birds to spot in the wild jungle. Hard to get photographs, let alone good ones. I chose two of my better ones. 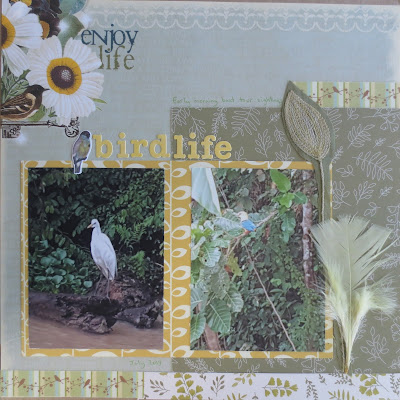 I've used soft greens and yellow. I like the overall softness of the end result. The large leaf you see is from a silk cushion I had. It had deteriorated in places but I loved  the stitched leaves so I cut them off to add to future projects. It adds a nice element of texture to the page.
Click on the link above to take you to ARTastic's facebook page. Here is the link to the blog to see the other Design Team's pages.
Dale x

Posted by Dale Tiernan at 10:19 AM No comments: 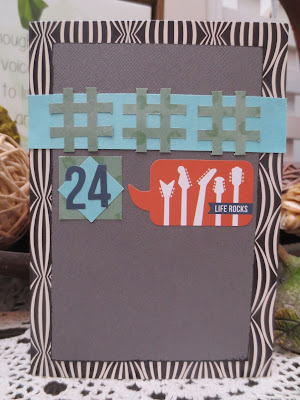 My son turns 24 this Saturday. He can't believe it, but neither can I. Where has the time gone?

He sings and plays guitar. I'm sure he'll like my card.

I've taken the sketch from June's Stick It Down card challenge for my design.

I used two Creative Memories punches to create the hashtags. I hadn't used that technique before, it just sort of occurred to me that it might look cool.
Dale x 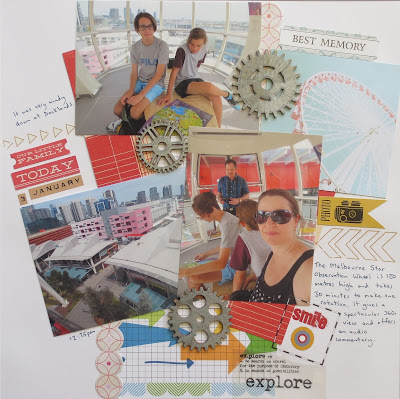 The layout I lifted 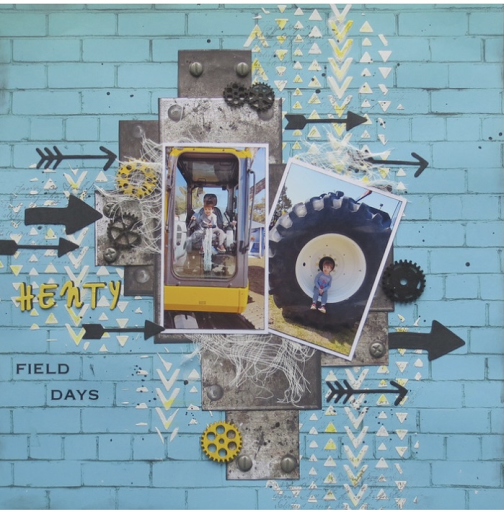 I have participated in Soul Scrappers' LIFT91 challenge. The idea was to lift some inspiration from a layout offered.
The things I chose were to have my design go mainly up the centre. I have some chipboard cogs which I coloured with metallic silver pen and then added dimensional magic to. It gave them a lovely sheen. I have some arrows and a dash of yellow and blue.
It was a fun design to make.
Posted by Dale Tiernan at 1:29 PM 1 comment:

Dale Tiernan
Hi. Thanks for stopping by. I'm the proud Mother of two wonderful boys, Damon and Mark. Married to Paul. We live in Western Australia. I'm an avid scrapbooker. I started (officially) in 2003 but really have been doing some version of scrapbooking since I was a child. Find me on Pinterest at http://pinterest.com/daisydokes/. 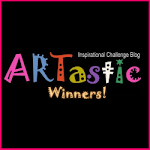